In this blog I consider the impact of Brexit on local government and housing, possible changes to procurement following Brexit, the growing crisis in the social care sector, and webinars on matters relevant to public services.

The European Movement has published the results of an online survey on the impact of Brexit that it conducted during September. They surveyed more than four thousand contacts across Britain, including councillors and local government officers.

More than 95% of respondents cited some negative impact Brexit had had on their local community. 84% said they had observed empty shelves in shops and supermarkets near them, with the problem growing worse.

79% of councillors reported handling Brexit-related casework since 1st January 2021, while 73% said that the support they had received from central government was 'poor' or 'very poor'.

By contrast, local authorities were judged to have performed better. 48% of councillors said they believed the council administration had offered 'satisfactory' support on Brexit-related issues, with a further 27% rating council support as 'good' or 'very good'. 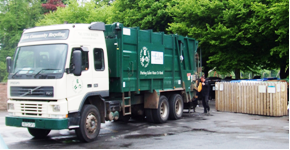 Refuse Collection services have been affected by shortages of drivers with some garden waste services suspended.

Respondents highlighted especially the significant costs of staff shortages in their area. A focus for many councillors was waste management services, although many also noted the blow felt by hospitality and logistics sectors. One respondent noted that key social housing building and repairs projects were being delayed and even deferred indefinitely as suppliers could not quote for key materials. Something that was widely predicted and will exacerbate the existing problems caused by inadequate maintenance and delayed major repairs that have put the spotlight on poor social housing in Britain.

The European Movement found that a complex but decidedly negative pattern of Brexit's localised impacts has emerged. They concluded that as shortages and disruptions grow worse, we can only expect this picture to grow darker for many.

While opponents of Britain’s membership of the European Union were always vocal in complaining about European regulations, they were always reticent about which ones they would change following Brexit. However, we will soon find out. On 23rd September, David Frost, the Minister of State for EU relations announced plans to remove hundreds of European Union laws from the British statute books.

The government appears to want rapid deregulation. Rules on genetically modified foods, vehicle standards, and medical products are among the government’s top priorities for removal. Of more direct relevance to local authorities and housing associations are the planned changes to procurement rules. At present large contracts must be let using the European procurement procedure that is designed to ensure fair and open competition and to prevent ‘cronyism’ and corruption. Under the government’s plans valuable public service contracts would be tendered to private providers with less scrutiny. This does not appear to me to be consistent with good financial administration.

The British Parliament, whose sovereignty is being eroded by Brexit

As part of the Brexit process, European Union law was brought into UK law wholesale. However, Parliament also voted away its right to scrutinise subsequent legislation by agreeing to the so-called ‘Henry VIII’ clauses that allow ministers to alter law by secondary legislation. Therefore, Parliament will have no say in these changes. So much for the sovereignty of Parliament that appears to have been eroded as part of ‘Brexit’ rather than being enhanced.

We are all aware of the crisis in adult social care.

However, I was shocked to see a report on adult social care in Cumbria that was made to members of Cumbria County Council by Councillor Patricia Bell (Liberal Democrat), the portfolio holder for adult social care. The report included:

"The increase in demand is being driven by range of factors, including in part the impact of the covid-19 pandemic on the operation of the NHS. For example, through the summer we have seen a 30% increase in the volume of social care support we are commissioning. At the same time the social care system is facing huge staffing challenges as a result of the pandemic, mandatory vaccination, wage increases in competing sectors and the loss of international staff.

"The consequence is that increasing numbers of people are waiting for care and this inevitably puts people at increased risk of harm. Our teams are used to dealing with pressure, but the severity and seriousness of the current situation is unprecedented and impacts right across the health and social care system.

The Cumberland Infirmary in Carlisle serves the north of Cumbria

"We are working intensively with the NHS and other local partners to respond both to the immediate short-term pressures and improve long term sustainability of the sector. This activity is focused around three main areas:

"This work will be closely monitored, but these challenges are significant and will certainly continue into the winter when demand for social care is likely to increase further.

"Despite this work, the reality is that significant national support and investment in the social care is needed to ensure there is the capacity to cope with this growing demand for support. In the meantime, our hard-working and committed teams will continue to do all they can to ensure that people’s needs are met.

"Cumbria is not unique; Local Authorities around the country are in similar positions.”

I have often written about adult social care in my blog, most recently when Boris Johnson made his announcement on health and social care in early September. This blog can be viewed by clicking here.

I am holding several webinars on matters relevant to public services including local government and housing during the autumn. For further information, please click here.