In this blog I preview the autumn’s comprehensive spending review. I conclude that budget reductions can be expected in most public services including local government, housing, & welfare; and that most public sector workers can expect pay reductions. I also look at the financial impact of coronavirus on district councils and risk management.

The government has confirmed that the long delayed comprehensive spending review will take place in the autumn of 2020. The review will set United Kingdom government departments’ resource budgets for 2021/22 to 2023/24 and capital budgets for 2021/22 to 2024/25. From the point of view of good financial management this is good in that public services will be able to return to medium-term financial planning rather than the annual budgeting to which the government has subjected them during recent years.

The spending envelope is yet to be announced but it is expected that, in total, increases in government budgets will increase by more than inflation but with increasing needs (especially in health, social care and welfare) savings will still be required. The government will also need to make provision for servicing its increasing levels of debt. Public borrowing in the April-June 2020 quarter was £128billion, the highest quarterly sum since records began. The Office for Budget Responsibility forecasts a deficit of £322billion in 2020/21, the largest shortfall in the public finances in peacetime for 300 years.

Rishi Sunak, the Chancellor of the Exchequer, said it was clear there will be tough choices and departments have been asked to identify opportunities to reprioritise and deliver savings. He said that:

“The first phase of our economic response to coronavirus was about safeguarding employment as far as possible. Our goal in the second phase is to protect, create and support jobs… The comprehensive spending review is our opportunity to deliver on the third phase of our recovery plan – where we will honour the commitments made in the March Budget to rebuild, level up and invest in people and places spreading opportunities more evenly across the nation.”

“For some time, we have been calling on the government to fix the current system of capital investment within the National Health Service by setting a multi-year settlement which roughly doubles the current budget. The Covid-19 pandemic has shown that this must be prioritised, to ensure estates and resources are in keeping with what’s needed… The comprehensive spending review is an opportunity to reset the finances of the National Health Service, and the government must treat it as such.”

Pinderfields Hospital in Wakefield. Will the National Health Service get the resources it needs? And, if so, will it be at the expense of other services?

Whether the National Health Service will receive all the additional resources that it needs remains to be seen. However, given that the Treasury will have a fixed envelope, any additional resources for the National Health Service will be at the expense of other services. The Institute for Fiscal Studies has warned that the review could lead to less money for spending departments than was trailed in March’s Budget. Ben Zarancho, research economist at the Institute for Fiscal Studies, said:

“The Chancellor has opened the door to a less generous funding settlement for public services than the one he committed to in March. Given the large amounts already promised for priority areas like the National Health Service, schools and police, and Rishi Sunak’s emphasis on the need for tough choices, another round of budget cuts for other, lower priority departments is a very real possibility.”

So, this is clearly bad news for services including local government and housing. It also seems likely that there will be further reductions to welfare entitlements as government seeks to control expenditure at a time when significant increases in unemployment will be experienced alongside the ongoing increase in the elderly population.

The Treasury announced on Monday that there will be an above-inflation pay rise for some public sector workers (including doctors, teachers, and police) this year, but this only applies to 900,000 of Britain’s five million public sector workers. Furthermore, in a letter sent to government departments about the comprehensive spending review, the Chancellor pointed out that coronavirus had led to a reduction in private sector pay and suggested that reductions in public sector pay should follow. He told them that:

This is bad news for all public sector workers, especially those such as nurses and care workers who will not benefit from the increases announced earlier this week.

Dave Prentis, General Secretary of Unison, told the ‘Guardian’ that:

“The fanfare announcement of more pay for some public service workers was clearly just a smokescreen for something altogether more sinister. Talking of holding down pay for all the National Health Service workers – including nurses, paramedics, cleaners, porters and healthcare assistants – and the care, school and council staff who’ve all given so much in the past few months will go down like a lead balloon with the public.”

In previous blogs I have written about the government’s failure to reimburse local authorities in England for the full cost of coronavirus and have demonstrated that this will have a severe effect on council budgets, especially those for social care. However, readers of this blog have rightly pointed out to me that the problem is faced by district councils as well as county and unitary authorities.

For example, at Eden District Council, the cost is projected to be £1.6million this year mainly because of the closure of the leisure centres, reduced commercial income, reduced income from car parking and planning fees and increased expenditure on preventing homelessness. So far, Eden District Council has received £555,000 leaving a funding shortfall of over £1million. They calculate that their share of the additional £1.6billion announced by the government recently is likely to be about £165,000 so that would still leave a shortfall of about £800,000. This represents over 10% of their budget.

Coronavirus has raised the profile of Risk Management. But Risk Management was already gaining a higher profile in local government and housing because of austerity, self-financed housing revenue accounts, ‘Brexit’ and the Regulator of Social Housing’s new regulatory standards. 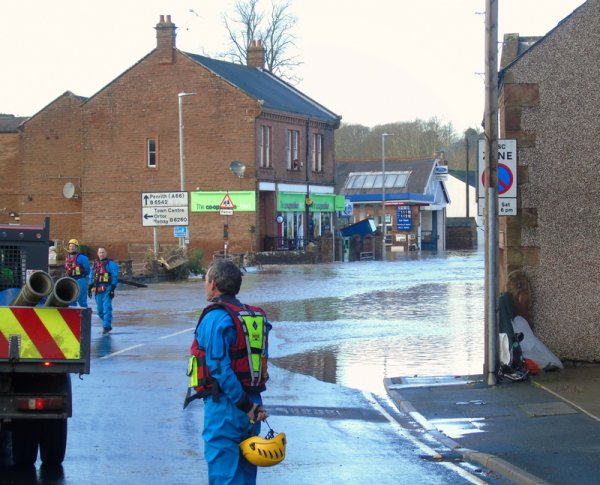 Flooding at Appleby in Cumbria. Flooding is a risk that is becoming more likely.

In this context there is a need for a greater understanding of the issues involved in implementing risk management among councillors, board members and officers responsible for all aspects of risk management. This week I have launched a webinar ‘Introduction to Risk Management in Housing and Local Government’ that will meet that need. For further information or to make a booking, please click here.

We will be holding many other webinars from July to September including: