The Hansard Society has published its 2019 audit of political engagement and it makes disturbing reading, attracting headings including one in the Guardian that said that Britain was ‘poised to embrace authoritarianism’. The top three themes are:

And key findings include:

Ruth Fox, Director of the Hansard Society, said that:

“Preferring a strong leader who is willing to break the rules or thinking that the government should be able to tackle the country’s problems without worrying about the approval of parliament, would challenge core tenets of our democracy. The public feel strongly that the system of governing favours the rich and powerful and that political parties don’t care about the average person. And people are not confident that politicians act in the public interest. Unless something changes, this is a potentially toxic recipe for the future of British politics.”

And Rosie Carter of ‘Hope not Hate’ told the Guardian that:

“We are facing a crisis of political mistrust. And when people do not trust traditional political systems, they look elsewhere. That’s when support for political extremes grows.”

Information on the Hansard Society's audit of political engagement is available on their website at: https://www.hansardsociety.org.uk/publications/reports/audit-of-political-engagement-16 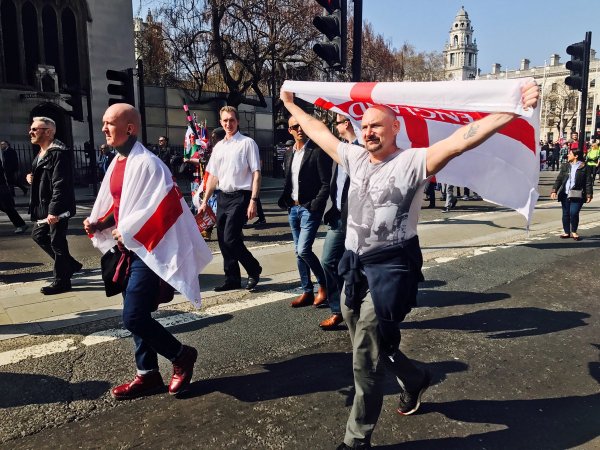 People demonstrating in favour of Brexit in March 2019

This situation has parallels with 1930s Europe where many people despaired of the potential of democracy to resolve their problems and turned instead to fascism or communism.

In this context, last week’s observation by Will Self in the ‘New European’ is significant:

"If Britain crashes out of the European Union, human rights legislation will no longer be incorporated in British law"

One of the councils where all the seats will be up for election is Eden District Council where I live. I have had a look at the 2015 elections in Eden to see how local democracy works here in practice.

There are 30 wards in Eden that elect 38 councillors. In 2015 there were nineteen wards in which there were no contested elections and in which 21 councillors were returned. The uncontested wards returned twelve Conservatives, six independents and three Liberal Democrats.

In the eleven contested wards 12,294 people turned out to vote out of an electorate of 19,097, a turnout of 64% reflecting the fact the elections were held on the same day as the general election. Of these, 44% voted Conservative, 26% Independent, 23% Liberal-Democrat, and 6% Labour. The councillors who were elected were nine Conservatives, four Liberal Democrats and four Independents. The full council therefore included 21 Conservatives, ten independents, seven Liberal-Democrats and no Labour councillors.

I am struck by the following:

I am not making a party-political point here. For example, I could quote other examples where the electoral system works against the Conservatives. However, I don’t think that an electoral process that excludes voters in two thirds of wards and delivers councillors in different proportions to votes can be described as a good democratic exercise.

However, in 2019 there is good news. Three wards are uncontested but there are contested elections in 27 wards. I will be able to vote in a district council election in Eden for the first time since I moved here in 1999! I hope that there will be a good turnout and a result in which the number of councillors elected for each party closely mirrors the number of votes that each receives. However, with our electoral system that is not guaranteed!

I think we need to give serious consideration to constitutional reform in Britain at Parliamentary, national and local level if our democracy is to survive.

In Scotland, local councils are elected by proportional representation, all Councils are currently under no overall control with parties collaborating to form administrations. The system appears to work well, and I would support its introduction in England and Wales.

In May, we will be holding our seminars on ‘All You Want to Know about Local Government Finance’. Local Government is going through a period of significant change. There has been a significant and ongoing reduction in funding for local government since 2010 and this is requiring a fundamental redesign of how authorities are organised, and services are delivered. The coalition government passed the Localism Act that promoted local decision making and abolished most ring-fenced grants. The localisation of business rates that is ongoing and revenue support grant is being phased out. There is uncertainty about local government finance moving forward because of the Fair Funding Review and ‘Brexit’.

This seminar is a useful introduction and overview of this important subject and covers revenue and capital finance, the changes that the government is making and how local authorities can respond to this challenging agenda. There are sessions in London and Leeds.