We published the May 2019 edition of the ‘AWICS Housing News’ yesterday. The 'AWICS Housing News' provides news and analysis of many aspects of housing in the United Kingdom and elsewhere. It is freely available to anyone with an interest in housing. It has been described as follows by a County Councillor:

"An excellent & informative read as always, Adrian; thank you."

And by the Chief Executive of an English Housing Association as follows:

"Great stuff. It's like reading the Guardian Weekly - a periodic potted summary of the shambles that is English housing policy......."

This month's edition includes articles on:

Local Elections were held in England and Northern Ireland last week. In my blog of 9th April, I previewed the elections in Eden District Council where I live. I noted that whereas in 2015, nineteen of the thirty wards were uncontested; in 2019 only three were uncontested; meaning that (unusually) the composition of the Council would be determined by the electorate. Across England there were 300 uncontested council seats in 2019, begging the question why other authorities haven’t done what Eden District Council has done to encourage people to stand in elections!

The result in 2019 was that the Conservatives lost overall control of the Council. The vote shares were as follows: Conservative 31% (-13%); Liberal-Democrat 28% (+5%); Labour 11% (+5%), Greens 10% (+10%), Independents & Others 20% (-7%). However, the first-past-the-post system, as usual, resulted in the composition of the Council not reflecting the shares of the votes. In a proportional system there would have been three fewer Conservatives, one more Liberal-Democrat, two more Labour, two more Greens and two fewer independents.

However, the first-past-the-post electoral system delivered even more perverse results in some other areas. For example:

I think this raises two questions:

These problems have already been addressed in Northern Ireland and Scotland where the single transferable vote system is used in the election of councillors. The system works well, and I think it should also be used in England and Wales. 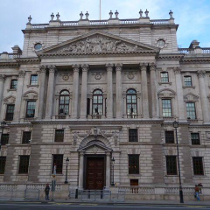 HM Treasury where the Spending Review is being carried out - or is it?

The United Kingdom Government manages its finances through a process of regular spending reviews that establish medium-term financial plans for public income, expenditure and borrowing. The next spending review is due to be held this year.

However, it is likely that the government will not be able to prepare a medium-term plan and will instead fall back to producing a budget for a single year. Speaking at a select committee hearing, Philip Hammond, the Chancellor of the Exchequer, said that:

“My own view at the moment is that, if we had not clearly found a solution to the Brexit conundrum that put us on our way to delivering an outcome, it would probably not be appropriate to go ahead with a three-year spending review… That is a decision we will consider more carefully and make in final form over the coming months.

“It feels to me that making a three-year settlement in a world where we have not yet determined whether we will be leaving the European Union on a smooth trajectory through a transition period with a deal, or crashing out without a deal, is an unwise thing to do.”

The United Kingdom Government has already abandoned its objective of balancing the budget and is now about to abandon any attempt at medium-term financial planning. This deterioration in financial management is very worrying. No local authority or housing association, for example, would consider managing its finances in this way.

In March, I was in Wigan, presenting an in-house session of ‘All You Want to Know about Service Charges in Social Housing’ to a group of council officers. At about the same time, Wigan Borough Council were being acclaimed as ‘Council of the Year’ in the Local Government Chronicle Awards for 2019.

In 2015, Wigan Borough Council launched its strategy to transform council services – ‘The Deal’. In that time the Council has re-invented its relationship with residents, saving £130million while increasing resident satisfaction. The deal has reduced demand in children’s social services and adults social care, enabled staff to have different conversations that focus on strengths and driven integration across health and social care. A Local Government Association peer review declared it as:

“One of, if not the best example of changing the local citizen-state relationship.”

We are holding seminars on ‘Developments in Local Authority Housing Finance’ in June 2019. This seminar looks in depth at current developments in local authority housing finance in England – especially the implications of government policies, public finances, rent policy, welfare reform including universal credit, the reinvigorated ‘right to buy’, the homelessness reduction act, the flexible homelessness reduction grant, the affordable housing programme (including the new funding for social housing), the abolition of the borrowing cap, local housing companies (what they can offer, how to establish them and how to set one up) and new development.

It also looks at potential future developments including those that may be caused by Britain leaving the European Union, whether the self-financing settlement should be revisited and the future of ‘right to buy’. There are sessions in London and Leeds.