Last Saturday I was invited to a ‘Forward in Europe’ meeting in Keswick. It was addressed by Lord Andrew Adonis and Julie Ward MEP who both advocated Britain’s continued membership of the European Union and a People’s vote.

These arguments are, of course, quite familiar; but Julie Ward MEP made some interesting points based on her experience as a member of the European Parliament, and earlier as someone working on European funded youth projects.

Prior to becoming and MEP, Julie Ward worked on a European funded arts project with excluded young people in a former coalfield community. One of the projects with which she was involved was the Sonnenberg Foundation that runs ‘peace schools’ that are attended for a fortnight by excluded young people from all European countries. At these sessions the young people made friends, stopped being afraid of ‘the other’ and explored what it means to be a European. Lives were transformed. These young people have now gained qualifications, taken jobs and set up businesses.

She stood for election to the European Parliament because of her belief in a ‘social Europe’ and her concern at the anti-European rhetoric of the media. She commented that:

“We didn’t lose the referendum in 2016. We lost it years ago because we failed to tell the full story about Europe… Europe is a peace project. The market is a framework for maintaining the peace in Europe.”

She described how the European Parliament works as follows:

“It is the most transparent Parliament in the world… We make our policy and laws by sitting in a circle and coming to agreements. I am proud that we make legislation like that… I’d like to thank my colleagues for their co-operation is how most speeches start… The European Union is holding multi-national firms like Amazon to account… Only a small proportion of British law come from the European Union and we have a say in them… Being in the European Union also means we have representation on the committee of the regions where all layers of government talk to each other at the European level. 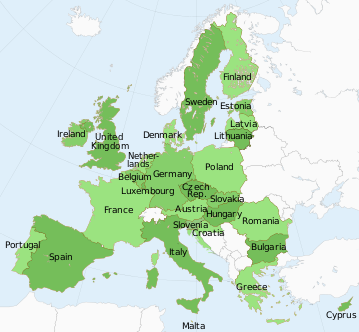 Member States of the European Union

The European Union has always had a regional development programme that aims to raise living standards in the poorest regions, and these have always included some regions within Britain. As a local government officer, I have worked on European programmes in the West Midlands and West Cumbria and in my view, these would not have happened if they had been dependent on the United Kingdom government. In fact, the United Kingdom government was often obstructive. As a Management Consultant I have worked with the Hebridean Housing Partnership and was told by an elderly resident of the Isle of Lewis that ALL the infrastructure on the island had been built through European programmes and that NO United Kingdom government prior to Britain joining the European Union had ever invested anything!

An interesting piece appeared in ‘i-news’ last week. It revealed that Britain will lose around £11.4billion in regional funding from the European Union after Brexit. Regions such as Wales, Northern Ireland and Scotland would have been entitled to a 22% increase in support from the European Union under the budget plans for 2021-2027, up from the £9.3billion that the United Kingdom receives in the current 2014-2020 budget. The increase in funding would have been because many areas of the United Kingdom are falling behind the European Union average in terms of regional income. This has been exacerbated in recent years by Britain’s widening wealth gap between Greater London that is the European Union’s richest region and places including Scotland, Wales, Cornwall and Northeast England that are among Europe’s poorest regions.

“Austerity cuts have fallen hardest on deprived communities in the north of England, which are enduring the highest poverty rates and weakest economies… The poorest areas have borne the brunt of council spending cuts. Local authority spending has fallen nationally by half since 2010, with areas such as Liverpool, Blackburn and Barnsley facing average cuts twice that of their counterparts in the more affluent south.”

It appears to me that the policy of successive United Kingdom governments has been to increase geographical inequalities in wealth, income and power; whereas it has always been the policy of the European Union to reduce them!

For more information about how AWICS provides advice and assistance to local authorities, please click here.

Eden District Council is among many councils that have set up arms’ length local housing companies. Theirs is called ‘Heart of Cumbria’. It is generally assumed that, despite disapproval having been expressed by government ministers, housing that is held by a local housing company is not subject to the ‘right to buy’ legislation. However, it is reported in the ‘Cumberland & Westmorland Herald’ that the Council’s auditors, Grant Thornton, have challenged this as follows:

“The stock is considered to be immune from right to buy under the current law. Should statutory changes be made such that it did apply, there is a risk that the stock of affordable houses to let could reduce as a result.”

“A report was due to be considered by the Council’s executive… but the matter was deferred… due to a lack of councillors for any decision to be quorate.”

I referred to the ‘Heart of Cumbria’ in my response to the Council’s consultation on its budget. To view or download a copy, please click here.

Our next seminar is on ‘All You Want to Know about Service Charges in Social Housing’ and will be held in London on 12th February. There are still a few places available.

This seminar is designed to give an introduction and overview to this important subject and is fully up to date with all developments. Service charges are an integral part of landlords’ work in financing value for money services and sustaining customer satisfaction. They have always been relatively complex but with increased financial challenges and legal and financial complexity there is an increased need to understand how service charging works.