This week I have been in Wales presenting an in-house session of ‘All You Want to Know about Service Charges in Social Housing in Wales’ for a housing association. 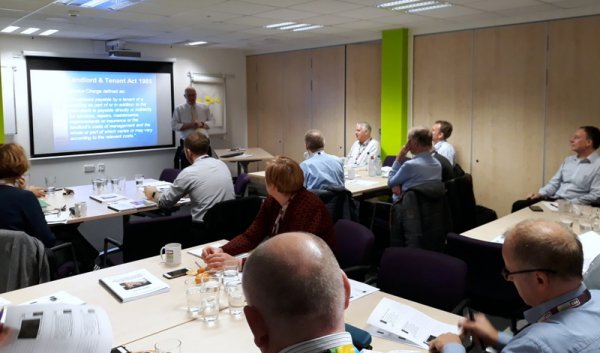 My article on ‘Brexit and Housing Associations’ has been published on the European Movement website. In it I argue that many people voted for Brexit because they wanted to protest about poorer communities being marginalised – including not having enough affordable homes. However, Brexit will make it significantly more difficult for housing associations to provide the increased number of affordable homes that are needed.

Sajid Javid, the Home Secretary, is in the news this week because of his decision regarding Shamima Begum, the young woman who joined ISIS in Syria at the age of fifteen.

I don’t intend to discuss every aspect of Shamima Begum’s case, but I am shocked by the decision to deprive her of her British citizenship. She is, and always has been, a British citizen, and has never been a citizen of any other state. As pointed out on Question Time by Jacob Rees-Mogg, it has been a fundamental principle of international law since the holocaust that no one should be made stateless and that everyone should be responsible to and represented by the state of which they are a citizen.

Sajid Javid addresses this point by saying that Shamima Begum has a Bangladeshi father and so, in theory, could apply to become a citizen of Bangladesh, a country that she has never been to and that has said that it would not accept her as a citizen.

If this principle were to be applied more widely, it would mean that any British citizen who has an ancestor who was a citizen of any other country in the world; could be deprived of their citizenship and deported to the country of their ancestor, regardless of whether or not that country was prepared to accept them. And this is a decision that would be taken by a government minister rather than by the courts.

During the European Union referendum campaign, Theresa May, then the Home Secretary, and now the Prime Minister, was asked about immigration and responded by saying that:

“What I’ve learned over six years is there is no single answer, silver bullet, there’s no one thing you can do that can suddenly deal with all the problems and concerns over immigration and that includes leaving the European Union, that’s not the single answer to this.”

Successive British governments have represented migration as a ‘bad thing’ and have sought to reduce net migration to Britain. The focus on net migration rather than immigration is interesting in that this approach seeks not only to reduce immigration but to encourage emigration. What Theresa May appears to be saying here is that ending ‘Freedom of Movement’ is not a sufficient condition for achieving what she believes is necessary on migration; and that further measures need to be taken to discourage immigration and / or encourage emigration.

And in October 2016, Theresa May gave us an insight into her view of citizenship when she told the Conservative Party that:

This implies that citizenship is for people with a strong tie to a specific place. People must regard themselves as British and not have any other identities. In this view, there is no British equivalent to the American idea that there can be native Americans, black Americans, Irish Americans and so on, but that they are all American citizens. In this view, you are either ‘British’ or you are not entitled to citizenship.

We already have the ‘hostile environment’ and we are already seeing many citizens of other European Union countries leaving Britain.

I therefore ask myself whether we are moving towards a situation where British citizens with some ancestry from outside the United Kingdom and / or those who do not subscribe to the government’s idea of ‘citizenship’ will find themselves being deprived of their citizenship and deported to the lands of their ancestors; with ministers rather than courts taking the decisions.

Unfortunately, such a policy would be popular in many quarters. I think we need to be vigilant and to remind ourselves that when totalitarian regimes start to deprive people of their human rights they start with small numbers of unpopular people, such as terrorist suspects, thus gaining support for their measures. However, they then move on to removing the human rights of other groups and eventually the whole population.

I would now like to turn to what at first sight may appear to be a very parochial issue: the replacement of the railings between the churchyard and the riverside footpath in Appleby in Cumbria! However, I think this illustrates significant issues about managing public money. 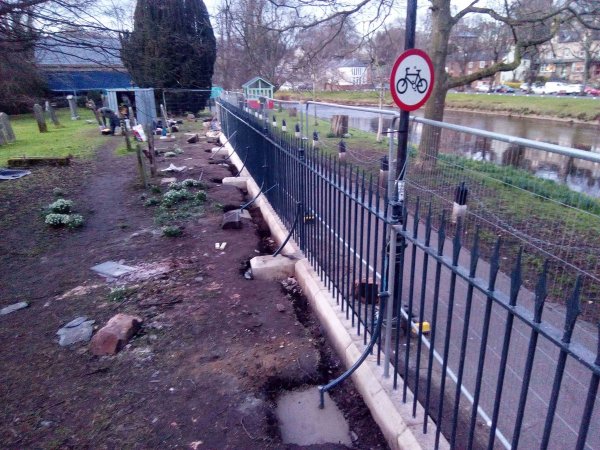 The new railings in Appleby in  Cumbria

In December 2015 a 70metre stretch of railings were damaged during floods. It is the responsibility of Eden District Council to repair or replace them. After more than three years this is now being done at a cost of over £100,000! It appears to me that this is a very long time to arrange what appears to be a relatively simple job and at over £1,000 a metre very expensive. I said as much on Twitter and am very grateful to Councillor Kevin Beaty (Conservative), the Leader of Eden District Council for responding. What he said included:

“You think I didn’t question this? The bulk of the money came from Historic England… They seem really expensive to me… I asked if we could put a sheep fence up!!!”

I am currently putting together our next seminar on ‘All You Want to Know about Local Authority Housing Finance 2019’ that will be held in London on 19th March 2019. This series of seminars gives an introduction and overview to this important subject and is fully up to date with all developments. It explains how the housing revenue account, housing general fund and housing capital programme work and considers the threats and opportunities facing local authority housing especially in view of the government's recent policy initiatives including the lifting of the 'borrowing cap'. The seminar is proving popular, but there are still a few places available.

For further information or to make a booking please click here