I have just responded to Eden District Council’s consultation on their budget for 2020/21.

Penrith Town Hall where Eden District Council is based.

The Council is now addressing weaknesses in financial management that have been apparent in the past and this is to be welcomed.

However, I suggest that the Council should consider:

In December, I also responded to Cumbria County Council’s budget consultation. To view or download a copy of my response, please click here.

This comes against a backdrop of continued austerity in local government in England with councils increasing Council Tax and reducing expenditure with some said to be in crisis. Homelessness services, social care and child protection are under the greatest pressure.

The Local Government Information Unit has published its latest State of Local Government analysis. It reveals widespread despair among councils over their financial health after a decade of austerity during which spending has been halved and the gap between demand and resources has grown.

In the last few years there have been widespread cuts in some high-profile areas of local government such as Sure Start centres, youth clubs, special educational needs and libraries, as well as in less prominent areas such as planning, family support services and environmental health.

Over 20% of councils said that the reductions to frontline services that they are being forced to make in 2020/21 are of a scale and impact that would be noticeable to the general public, and 10% even said that shrinking resources meant that they were in danger of being unable to meet their legal obligation to deliver statutory services.

75% of councils have no confidence that local government finance arrangements are sustainable, while only 3% are confident that the government will act to halt the council funding crisis, despite increasing pressures. Some doubt whether the social care funding green paper, delayed since summer 2017 will ever be published.

97% of local authorities will put council tax up again in April 2020 and 67% of councils said the current 3% cap on council tax increases – that councils can breach only if they get residents to agree to it in a local referendum – should be ended so they could raise more funds from residents to fund local services.

97% of local authorities will raise charges for services such as green waste, planning permissions, car parking, leisure and arts centre memberships, burials and cremations and pest control. Many councils are developing alternative income streams, with 75% of councils borrowing to invest in commercial property schemes despite warnings from auditors that this involves risks. 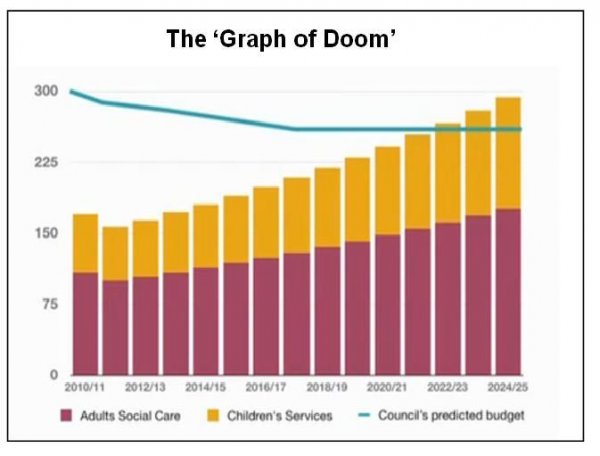 The notorious 'graph of doom' that shows how councils' resources will decline so that by 2022/23 they will not be able to afford adult social care or childrens' services, let alone anything else.

Jonathan Carr-West, the chief executive of the Local Government Information Unit, said that:

“The state of local government finances is dire. Eight years later and the message continues to be the same, a broken record. It is simply unacceptable that the government has let things get to this point… This isn’t local government asking for more money. This is about a fundamentally flawed system that has been broken for years and the government continually refusing to acknowledge or engage in a proper solution… Sticking plasters will not solve these critical issues. Our social care system is no longer on the edge, it’s fallen off the cliff. Our children’s services aren’t at breaking point, they’re broken. These issues cannot wait another year to be solved.”

However, a spokesperson for the Ministry of Housing, Communities and Local Government said that:

“Next year, councils in England will have access to £49.1billion – the biggest annual real-terms increase in spending power in a decade – including an extra £1.5billion for social care. The funding plans provide certainty for councils who are responsible for delivering the services their communities need.”

But much of this increase comes from increased Council Tax and it is not enough to meet the cost of inflation and service pressures and does nothing to reverse the substantial budget reductions that have been suffered since 2010.

We are holding seminars during June 2020 on ‘Lifting the Lid on Local Government Finance’ in which Councillor Graham Chapman of Nottingham City Council and I will explain how local government finance works in PRACTICE rather than in theory. For further information or to make a booking, please click here.

According to the Organisation for Economic Co-operation and Development (OECD) in 2017, 17.5% of children in the Britain lived in relative income poverty compared with an OECD average of 13% and only 3% in Finland. Only five OECD countries saw wages fall between 2007 and 2018, one of them being Britain where wages fell by 2%. The average increase in OECD countries was 6%, with increases of 10% in France and 33% in Poland.

Meanwhile, Sir Michael Marmot, the Director of the University College of London Institute of Health Equity has published a report that shows that increases in life expectancy in England have stalled for the first time in more than a hundred years and even reversed for the most deprived women in society; while the gap in health inequalities between prosperous and poor areas and between north and south is even wider than it was a decade ago, in large part due to the impact of cuts linked to the government’s austerity policies. He said that:

“Austerity has taken a significant toll on equity and health, and it is likely to continue to do so. If you ask me if that is the reason for the worsening health picture, I’d say it is highly likely that is responsible for the life expectancy flat-lining, people’s health deteriorating and the widening of health inequalities. Poverty has a grip on our nation’s health – it limits the options families have available to live a healthy life… Something has gone badly wrong.”

My conclusion: Poverty and Inequality in Britain has increased, is increasing but ought to be abolished.

Our next seminar ‘All You Want to Know about Local Authority Housing Finance’ will be held in London on 17th March 2020. This is a very useful introduction to, and overview of, local authority housing finance. For more information or to book a place, please click here.