Tomorrow I will be in London to present our seminar: ‘All You Want to Know about Service Charges in Social Housing’. as usual, this has been popular and I am looking forward to meeting the delegates. The next session will be in Leeds on 4th June.

The Office for National Statistics has announced that the UK Gross Domestic Product grew by only 0.6% during October and November 2018 but then fell by 0.4% during December 2018. The UK economy is now in decline!

An interesting piece appeared in the ‘Guardian’ last week about how the Treasury is preparing for Brexit. Apparently, there is a plan, code named ‘Project After’ that is designed to manage a post-Brexit recession caused by a reduction in exports and investment. This plan is designed to maintain demand in the economy through public borrowing to fund expenditure and tax reductions and measures to encourage the public to borrow to maintain levels of private consumption. The main measures are:

This appears to me to be an interesting economic plan. My concern would be that, while it involves a considerable increase in public borrowing, very little of this would be used to support hard pressed public services such as the National Health Service, Local Authority services for Adult Social Care and Children’s services or the provision of affordable housing and tackling homelessness. 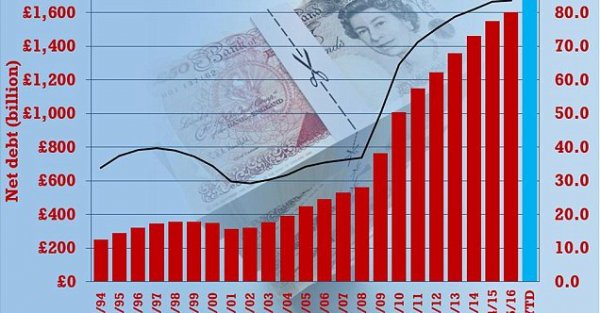 Graph showing how UK public debt has ballooned since 2008

I am also concerned that such a policy would inevitably place the UK government in the hands of their creditors with a resultant loss of ‘control’ over budgets and ‘sovereignty’. The UK government has operated at a significant deficit each year since 2008 and its liabilities already exceed the value of its assets.

The Guardian article can be viewed by clicking here: https://www.theguardian.com/politics/2019/feb/08/how-ministers-will-try-to-protect-uk-economy-in-a-no-deal-brexit?utm_term=RWRpdG9yaWFsX0d1YXJkaWFuVG9kYXlVS19XZWVrZW5kLTE5MDIwOQ%3D%3D&utm_source=esp&utm_medium=Email&utm_campaign=GuardianTodayUK&CMP=GTUK_email

Meanwhile, the Institute for Fiscal Studies has warned that public services face years more of austerity unless the chancellor increases budgets by billions of extra pounds at the 2019 Spending Review. They calculate that government spending plans announced in the 2018 Budget will mean real terms reductions for public services other than health, defence and overseas aid; and that to avoid any reduction in real-terms expenditure per capita, unprotected government budgets (including those of the Ministry for Housing, Communities & Local Government) would require an additional £5billion by 2023/24. Budgets for unprotected services have been reduced by 3% year on year since 2010, amounting to a loss of £40billion.

Ben Zaranko, research economist at the Institute for Fiscal Studies told the ‘Public Finance’ magazine that:

“While an economically bad Brexit would likely mean lower spending in the longer term, if anything it might require additional spending over the next few years.”

The financial outlook for public finances and public services does not appear to be good!

The Briant Estate in Lambeth, London.

This week we launch our seminar: ‘Developments in Local Authority Housing Finance 2019’. Sessions will be held in London and Leeds during June 2019.

This seminar looks in depth at current developments in local authority housing finance in England – especially the implications of government policies, public finances, rent policy, welfare reform including universal credit, the reinvigorated ‘right to buy’, the homelessness reduction act, the flexible homelessness reduction grant, the affordable housing programme (including the new funding for social housing), the abolition of the borrowing cap, local housing companies (what they can offer, how to establish them and how to set one up) and new development.

It also looks at potential future developments including those that may be caused by Britain leaving the European Union, whether the self-financing settlement should be revisited and the future of ‘right to buy’.

The seminar will address the following questions:

It has been announced that the Freedom of Information Act will apply to housing associations in Scotland from November 2018. A Scottish Government spokesperson said that:

“We are committed to extending coverage of the Freedom of Information (Scotland) Act 2002 and following extensive consultation and discussion with key stakeholders., a draft order has been laid in parliament that will extend the coverage of the Act to registered social landlords and their subsidiaries.”

“This is a major victory for us in campaigning for the extension of (the) Freedom of Information (Act) to all tenants across Scotland, and should be a clear signal to tenants elsewhere in the United Kingdom to champion their right to freedom of information from their housing associations.”

Last week, the British information commissioner said that housing associations in England should also be made subject to the Freedom of Information Act. She said that in the case of housing associations, the transparency gap is ‘emphatic and clear’ especially in the wake of the fire safety concerns that have arisen after the Grenfell Tower fire.