Last week I came across this very informative graph provided by the National Housing Federation that compares projected public expenditure in the United Kingdom with Germany and the United States. 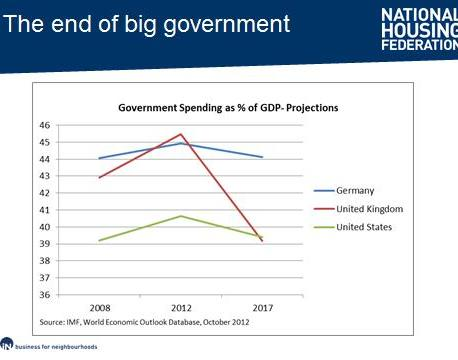 It clearly shows that the United Kingdom is heading for an approach to public expenditure that will compare more closely with the United States model than the European model. It should also be remembered that while public expenditure is shown as reducing, capital financing costs are increasing, so the reduction in expenditure on services is actually more rapid than is shown in the graph!

I am becoming increasingly concerned about the future of housing associations. It is clear that many in government and in business consider that they are organisations that make poor use of their considerable assets, require considerable subsidies through capital grant and housing benefit, trap residents in benefit dependency and do not make a significant contribution to increasing home ownership. It is already clear that the autumn spending review will provide no resources for social or affordable housing and that the government is asking the larger housing associations to focus on affordable home ownership. The government’s future plans are likely to include moving housing associations towards the private rented sector – possibly including flotation on the stock exchange. Those of us who work in the sector may not share the analysis or welcome the direction of travel but there is a need for us to respond to it!

All this leaves me wondering who is going to house those in greatest need. Ken Lee, the Chair of the CIPFA Housing Panel says in ‘Public Finance’ this week that the government’s main objective is to see every household own their home and:

“They have not thought through how they are going to deal with the underclass.”

I suspect that the government is also keen to see an expansion of the private rented sector and sees this as the way in which those who cannot afford to buy will be housed.

We have updated our brochure that describes the management consultancy and training services that we provide for housing associations. A copy can be downloaded from HERE.

One of our principal clients, Oldham Borough Council, was one of the Universal Credit pathfinders and is also part of the Greater Manchester combined authority. The Council is now calling for the devolution of welfare powers from central to local government. Proposals include the power to lift sanctions attached to Universal Credit and a new ‘duty to co-operate’ on branches of job centre plus. Emma Alexander, the Council’s Executive Director of Commercial Services is quoted in the ‘Local Government Chronicle as saying:

“Just imagine if we were running Jobcentre Plus in Greater Manchester as part of the devolution agenda. The benefits could be huge… It could make a real difference.”

On 8th September 2015 I will be chairing a session on the operation of the service charge regime in different forms of tenure at the National Housing Federation’s Conference on Leaseholder and Tenant Service Charges in London. I am looking forward to meeting clients and readers of my blog and newsletters at this event.

On 22nd September I will be presenting the AWICS seminar ‘Right to Buy Extension, Sale of High Value Council Homes and Social Rent Reform’ in London. This session will look in detail at the financial implications for housing associations and local authorities of the government’s proposals to extend the ‘right to buy’ to tenants of housing associations in England; sell high value council homes; reduce social rents by 1% a year and charge market rents to tenants on high incomes. The session is proving very popular with people from local authorities and housing associations but we still have a few places available. For more information or to make a booking please click HERE

This week we have launched our seminars on the ‘Cities & Local Government Devolution Bill and its Implications for Local Government and Housing’. This seminar will be held in Oldham and London and will consider the following questions:

The two presenters will be Graham Chapman of Nottingham City Council and myself. I am very pleased that Graham has agreed to speak because of his considerable knowledge of devolution gained as Deputy Leader of Nottingham City Council and Chair of the Nottinghamshire Leaders’ Group that is bidding for Combined Authority and City Deal status for Nottingham and Nottinghamshire. The negotiations surrounding this deal are among the most advanced in England and the devolution package being negotiated is one of the most comprehensive.

We have also published the August editions of two of our newsletters this week: the AWICS Housing News and the AWICS Welsh News.

While the AWICS Welsh News includes articles on:

On 8th September 2015 I will be chairing a session on the operation of the service charge regime in different forms of tenure at the National Housing Federation’s Conference on Leaseholder and Tenant Service Charges in London. I am looking forward to meeting clients and readers of my blog and newsletters at this event.

Last week I went to Camden to present an in-house training session on housing finance. It was held in their new offices at St. Pancras Square just to the north of St. Pancras Station. The offices are impressive as they are in a ‘state of the art’ eleven floor building and incorporate a range of modern ideas about office work. 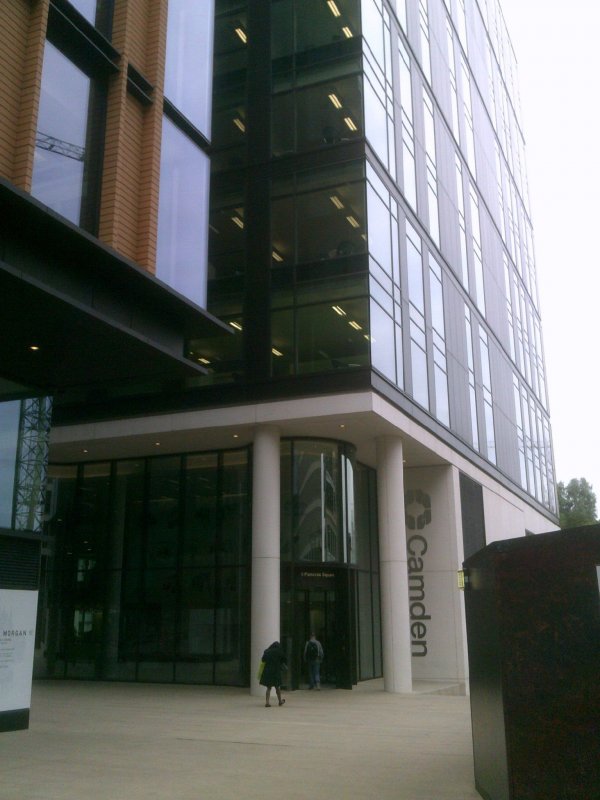 When you arrive at reception you are given a card that allows you access to the parts of the building where you are authorised to go. When you go in the lifts you need to identify yourself by showing your card and the system determines which lift you should use. As a visitor you go to the second floor where there is a ‘meet and greet area’ with a café, easy chairs, tables and desks suitable for a variety of meetings and surrounded by an open plan office. After being ‘met and greeted’ I was escorted to the top floor where there are modern meeting rooms with panoramic views over north and central London including views of the Council’s own housing estates and ambitious regeneration schemes.

Clearly there are enormous challenges in Camden to meet housing need and to do this in the context of austerity and changing government policy towards social, affordable and market housing. However, the Council is rising to the challenge – for example it has secured the largest local authority affordable housing investment programme in England.

Camden Borough Council also runs a ‘paperless’ office so attendees made notes during the training session on laptops rather than on paper and some had to borrow pens to fill in my ‘hard copy’ feedback forms!

My travels this week also took me to Leicester which provides an excellent example of ‘localism in action’. In March 2015 the attention of the world was focused on Leicester for the reburial of King Richard III (1452-85) whose remains had been found beneath a car park at the site of the former Greyfriars Church. Richard’s tomb is now the centre piece of Leicester Cathedral opposite which there is a new and excellent visitor centre provided by Leicester City Council that describes not only the life and death of the King but also the cutting-edge archaeological work that was undertaken by Leicester University. Lessons are also drawn from Richard’s life and times when there were civil wars for the times in which we now live; and comment made about how the King’s reputation has been influenced by propagandists and artists including Shakespeare. The Richard theme (or perhaps ‘brand’) can also be seen in the City’s other historic sites, arts venues, restaurants, shops and hotels. This is clearly a major and successful initiative that is helping to cement a sense of ‘place’ in a diverse community and to promote its tourism and economic development.

I can’t help thinking that there must be enormous untapped potential in all our cities, towns and villages for ‘place shaping’ and ‘economic development’. Leicester had a King buried in a car park but I suspect that every community has something ‘buried’ somewhere that could prove of great value if it could be found and used to its full potential.

This week Genesis Housing Association has grabbed the headlines in the housing press by announcing that it will no longer build social or affordable housing but will concentrate on shared ownership, market rent and outright sale. This move is in response to the changes in housing policy that were included in the Queen’s speech and July budget including the extension of ‘right to buy’ to housing association tenants and the reduction in social and affordable housing rents.

Neil Hadden, Chief Executive of Genesis, told ‘Inside Housing’ that:

“We are not able, or being asked, to provide affordable and social rented accommodation to people who should be looking to the market to solve their own problems. I do think [the Budget] is a watershed in all sorts of ways.”

Clearly the focus of the government’s housing policy is on helping people into home ownership and their budgets are similarly focused on this priority. Providing social housing for people who are homeless or in unsuitable accommodation does not appear to be a priority. In these circumstances I expect that many (but not all) housing associations will follow the lead set by Genesis.

However, this does lead me to ask two questions:

I posed these questions on ‘Twitter’ on Thursday evening and it provoked an interesting response especially to the second question.

My second question assumes that someone should provide social housing. However, who should thatsomeone be?

However, what happens if the government does not consider that it has such a responsibility?

And where do local authorities stand? They have statutory responsibilities for homelessness and must fulfil these in a situation where the housing market and their finances make it increasingly difficult. Many authorities continue to provide council housing but many do not. Many authorities aspire to build more social housing but they operate within constraints and can they be held responsible if insufficient homes are built?

We will be considering the changed landscape in housing in our seminars on ‘Right to Buy Extension, Sale of High Value Council Homes and Social Rent Reform’ during September 2015. Further details can be found HERE